Most people who claim they read Genesis 1 “literally” don’t. They believe that what they believe about Genesis 1 is literal. But they aren’t reading Genesis 1 literally.

If we read Genesis 1 literally, we come out with a very different picture than most literalists imagine. Indeed, we find ourselves firmly planted in the Hebrew worldview—an ancient worldview. And, if we know our history, we know that the Hebrews had no concept of a round earth that coursed around the sun. They believed the earth was flat, the sky was a dome, and the sun revolved around the earth.

So, let”s take a close, literal reading of Genesis 1. I’ve tried to illustrate the events as best I can. 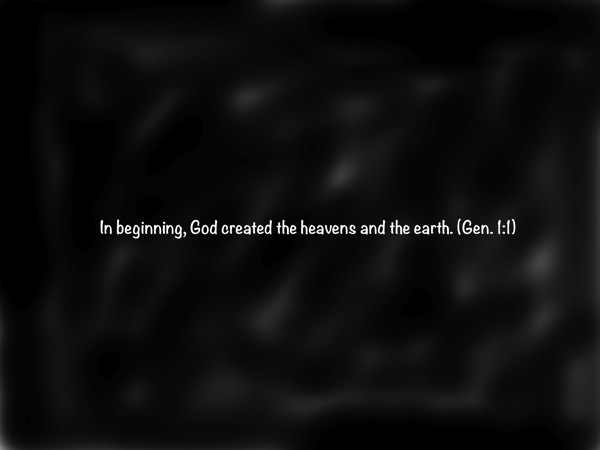 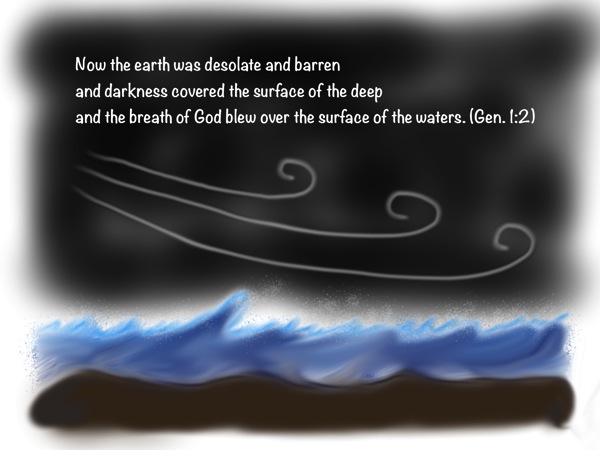 Do you notice something here? I mean, really? There’s already something in existence before God starts saying “Let there be.” There is an earth that is desolate and barren (more on that in a minute). There is darkness. There is a deep that covers the earth (this becomes more evident later in Gen. 1:9). And God’s breath is blowing over the surface of the waters.

Usually translations render the Hebrew expression tohu vabohu as “formless and void.” This is unfortunate and misleading, because to Western ears “formless and void” sounds like vast emptiness, somewhat like our concept of space. But that’s not what the writer is saying. In fact, in the only other place the expression tohu vabohu is used (Jer. 4:23), it clearly refers to a desolate wasteland, not empty space (see also Jer. 4:26).

“And God said, ‘Let there be light!’ And there was light.” 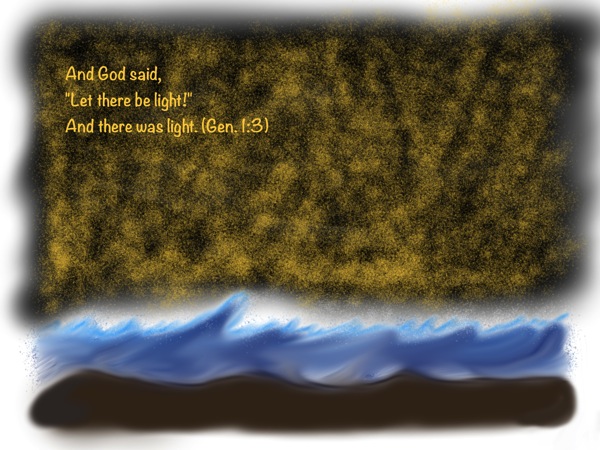 Now the actual creative words begin. And the first thing God creates is light. But, . . . the Bible says that the sun isn’t created until day four (Gen. 1:14-19). So, clearly the writer of this narrative believed there was a source of light other than the sun. This certainly doesn’t correspond with our modern understanding that the sun is the source of physical light. 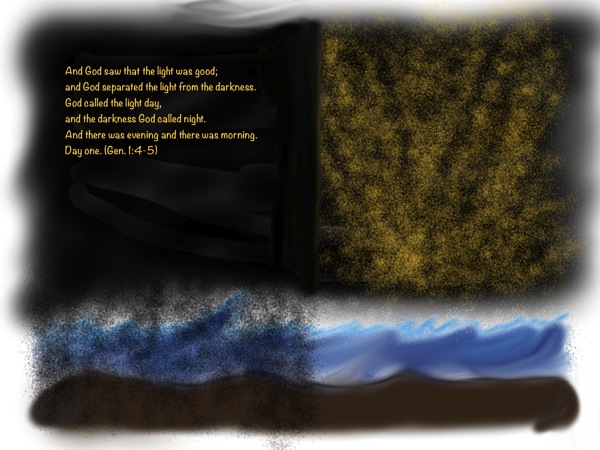 God separated the light from the darkness (in the next verses God also separates the waters). God called the light “day” and the darkness “night.” Now day and night exist (without the sun) and the creative act of day one is complete.

God creates a dome in the midst of the waters to separate waters from waters. The Hebrew word (raqîya’) refers to a solid dome, something hammered out. Ancient Hebrews believed the sky was a solid dome that kept the waters above from falling down upon them. They believed the sky was blue because of the waters above the dome. The Hebrews also believed the earth was flat and stationary and that the sun moved. Though that fact isn’t overt in Genesis 1, numerous texts attest to this belief through expressions like “the ends of the earth” and the sun “rising and setting” (Josh. 10:13; Job 37:3; 38:13; Pss. 93:1; 96:10; 103:12; 104:5; Eccles. 1:5; Jer. 16:19; Isa. 40:22 [flat circle]; Dan. 4:11). The Genesis writer was a person of his time. He described the world as he observed it. And, if you go out somewhere flat where you can see the earth and the sky, it looks exactly like the writer describes it: a dome that meets the flat earth with a sun moving round about. 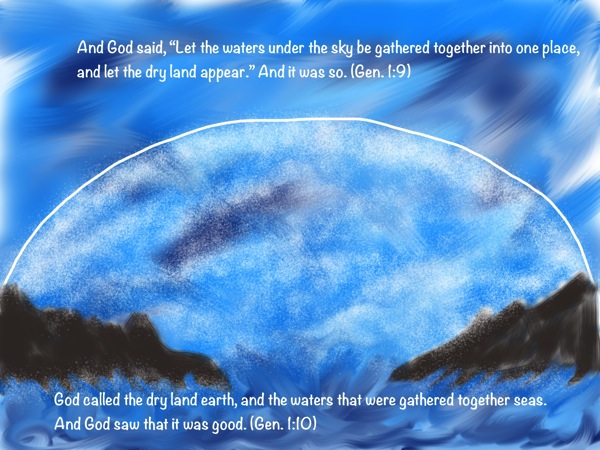 Now the desolate barren wasteland hidden underneath the deep is revealed. Notice that God does not create the dry land—it already exists. God merely shifts the waters around so that the dry land appears. 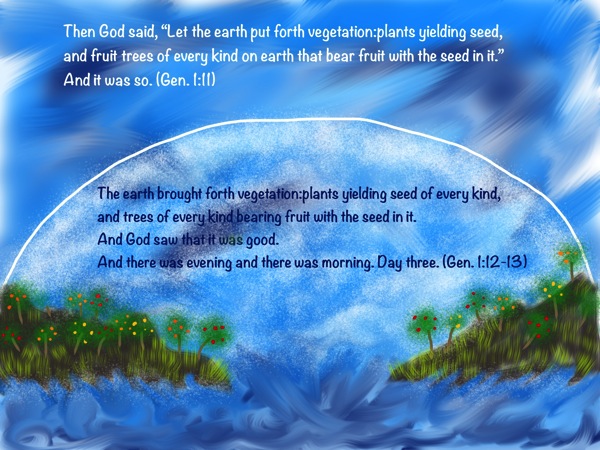 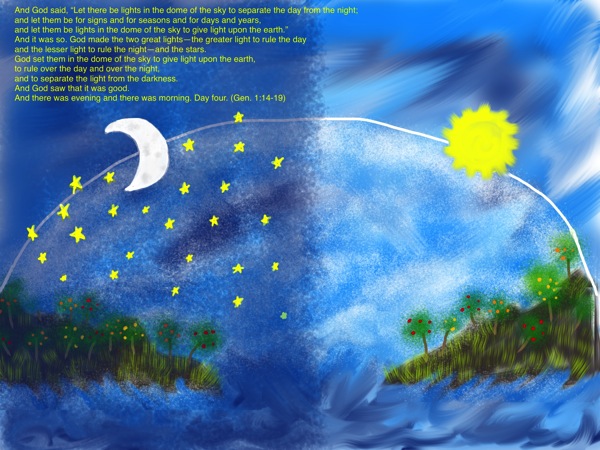 This is the longest description of any of God’s creative acts. God creates the lights in the dome. Notice how carefully the writer narrates these events. In other Ancient Near Eastern cultures, the stars, the moon, and the sun were deities. But in the Hebrew writer’s account, these heavenly bodies are merely signs of the seasons and the days. They “rule” over the day and the night, like dignitaries who rule in the stead of the king. But they aren’t the king (in this case God). They give off light, but they aren’t the source of light. They are not gods.

In this way, the writer demotes the stars, sun, and moon from being deities. In fact, he even avoids using the words “sun” and “moon.” He calls the sun the “greater light” and the moon “the lesser light” to avoid any possibility of a reader thinking that these are gods (since the Semitic names for sun and moon were also the names of deities).

“And God said, ‘Let the waters bring forth swarms of living creatures, and let birds fly above the earth across the dome of the sky.’ . . . . 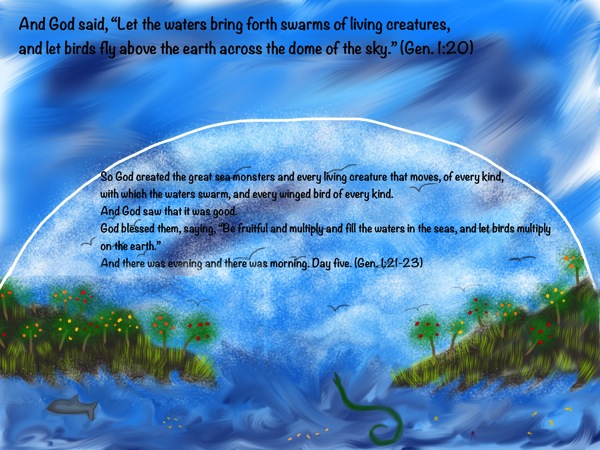 Once again God invites creation to participate. “Let the waters bring forth swarms of living creatures . . .” The Psalms and Job mention the great sea monsters alluded to in Genesis. Their names are Rahab and Leviathan. According to these texts, God fought against the sea monsters and defeated them (Job 9:13; 26:12; Job 41:1-34; Ps. 89:10).

“And God said, ‘Let the earth bring forth living creatures of every kind: cattle and creeping things and wild animals of the earth of every kind.'” . . . . 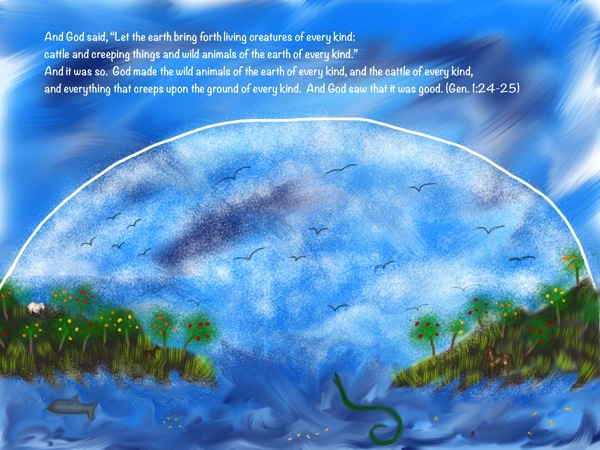 Now the earth brings forth the creatures that will inhabit it (this is similar to how Genesis 2 describes the animals being created from earth, 2:19). In my illustration, I added a sheep, a deer, and a horse because that’s about all I could draw. But the writer was probably imagining a far greater diversity of species, including icky creeping things like scorpions.

Last, but not least: humanity. 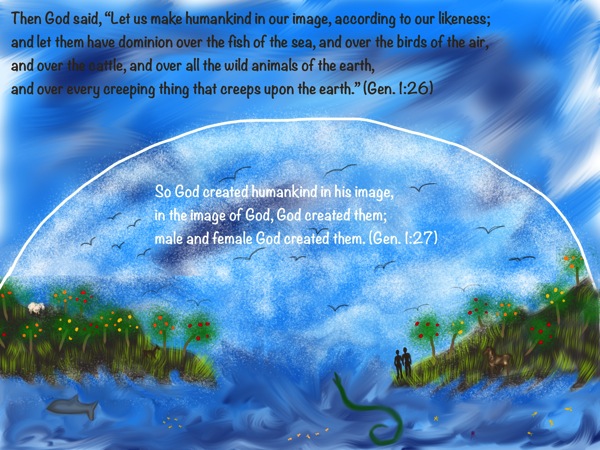 The remainder of the chapter describes God’s commands for the humans and the non-human inhabitants of the earth. God instructs all of them (both human and non-human) to eat seed bearing plants and fruit bearing trees. In other words, in Genesis 1 all creation existed on vegetation. God also institutes the Sabbath which deserves a post all to itself.

What does all of this tell us if we read Genesis 1 literally? Well, first, it tells us that the writer wasn’t a 21st-century westerner who knows that the earth is round and rotates around the sun. In other words, Genesis 1 isn’t modern science and it was never intended to be. Second, it tells us that the writer of Genesis 1 described creation from the perspective of his flat earth, dome sky worldview. He depicted the world as he observed it. Third, this means that if you read Genesis 1 literally, you come out with a picture something like what is portrayed below. 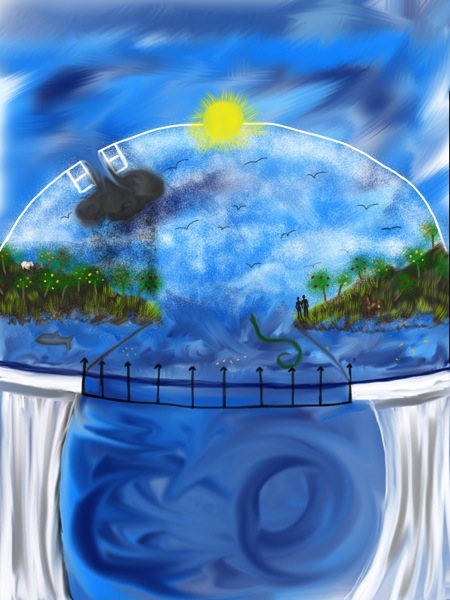 Now, unless you believe that the earth is actually flat, set on pillars, and that a solid sky dome holds the waters above from careening down upon us, then you don’t really believe Genesis 1 literally. Yes, there are flat-earth creationists who do believe these things and, at least, they are consistent.

But if we’re going to be realistic and consistent, we have to acknowledge that the writer’s worldview is not our worldview. Most of us do not believe that the earth is flat and the sky is a dome. Most of us know that the earth is round and rotates around the sun. If that’s the case, then we have to acknowledge that Genesis 1 is not a scientific description of the earth. It is a theological one. We don’t have to become flat-earth creationists to accept the theology the writer is communicating—that God created the earth and everything in it.

This is why biblical literalism (in the sense stated at the beginning) fails. It fails to read Genesis 1 literally. It fails to acknowledge the ancient writer’s worldview. It tries to cram modern rationalism and modern pseudo-science into an ancient text, and in so doing, it completely ignores the sacredness of the text—its poetic beauty, its structure, its focus on the sacred week, its emphasis on God as creator and on humanity as God’s representatives, and its acknowledgment of the goodness of all creation. All of these things are communicated through a flat earth, dome sky worldview, but they transcend it.

A blog filled with stories, fountain pens, photography, and the Hebrew Bible