The truth is, I have too many fountain pens. But, I didn’t have an Omas. I started looking for one several months ago. Originally, I settled on an Omas Ogiva Vision in blue with rose-gold trim. But after I received it, I realized that it was too similar to my Platinum 3776 in Chartres blue. So, I sent it back and ordered the Omas Ogiva in saft green celluloid. I’m glad I did.

The Omas Ogiva saft green is part of a limited edition vintage series. I own pen number 223 out of 527. The engraving is almost impossible to see, as you can tell from the photograph.

It arrived elegantly packaged. The outer box is grey and dark grey. 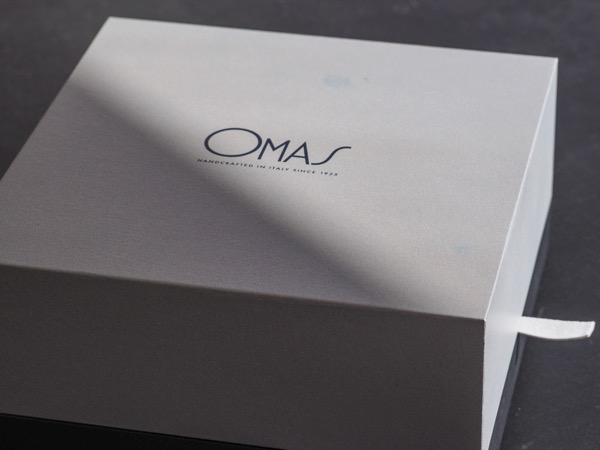 The inside of the box top is lined with silver/grey suede-like material imprinted with Omas’s motto.

The pen sits in a hollowed out portion inside a pen sleeve. A bottle of Omas green ink is included. Beneath the box insert are two booklets, one about the Omas limited edition and one about Omas in general. I must say the presentation is impressive. Unfortunately, I opened the box upside down (well, I thought the smaller portion was the top), and everything sort of fell out. At least I was sitting on the floor! So, I had to reconstruct the whole thing for the photograph. 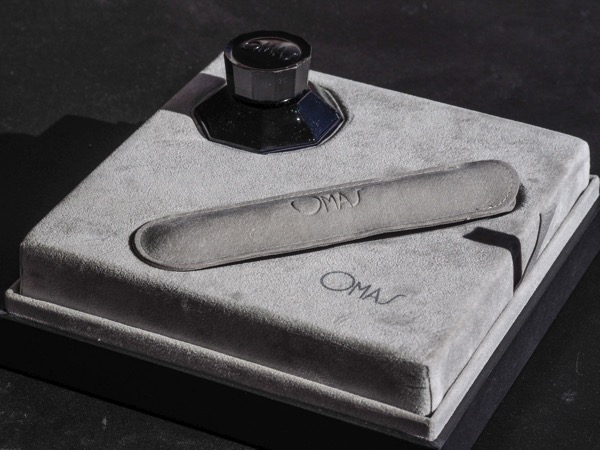 The Omas Ogiva saft green is a beautiful pen. The celluloid is a rich, deep olive-green with pearly flecks of lighter green, amber, dark green, and black threads. Apparently the process Omas uses to make the celluloid takes months. The craftsmanship is evident in this variegated celluloid that sparkles in sunlight and looks beautifully subdued in regular light.

The rose-gold nib and trim suits the pen perfectly. Both the cap band and the grip section sport the Greek key design.

I asked Mr. Mottishaw of Classic Pens to grind my broad nib to a midi—a cross between a cursive italic and a stub. That has become my favorite grind since it gives the nib line variation and character without the scratchy, tempermental nature of a cursive italic. This nib writes smooth and juicy, and, remarkably, it has some flex to it. 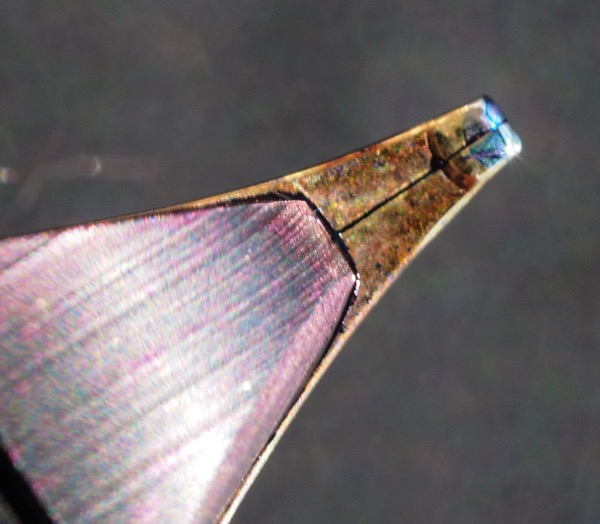 The Omas Ogiva is a large pen (5.9 inches in length, capped)—much larger than the Ogiva Vision I ordered before. It is similar in length to a Montblanc 149, but it is nowhere near as heavy. Because of the length, I would not post this pen. The cap clip has the standard Omas rolling cylinder that makes it easy to clip to a shirt pocket or a notebook.

The pen uses a piston filling mechanism and holds 0.9 ml of ink (I think. That’s how much other Omas piston fillers hold. The chart at Classic Pens did not have the exact amount for this pen). I inked it with Sailor Yama Dori for the writing samples below because that ink has such nice shading qualities. But I’m pretty Rohrer and Klingner Alt-Goldgrün might be this pen’s ink match.

I’m quite pleased with my Omas Ogiva. It’s a beautiful pen and writes a lovely line.

A blog filled with stories, fountain pens, photography, and the Hebrew Bible